Emil Calleja Bayliss has interviewed the amazingly talented and nationally popular Thea Garrett exclusively through ESCflashmaltacom as he delves into her participation within the semi-final round of this years’ event and how she has been dealing with the victory since February. 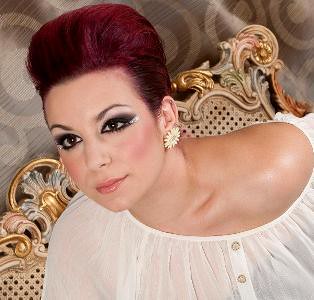 This years’ Malta Eurosong was criticized by both local and foreign media. Had you been one of the persons watching the contest at the MFCC or at home, who would you have voted for? Do you think that this year’s standards were higher or lower when compared to previous years?

From my point of view, I think the standard of songs in general was lower but the thing is that once you listen to them on the night, every song is much better than on the semi-final or backing through the CD track. On the night everybody looks and sounds better so. In fact my opinion did change from the first time I heard the songs till the final night and personally I would have voted for Lawrence Gray and his song Stories because it is my type of song.

Had you not won the contest this year, would you have given it another shot next year and how important was it for you to actually win this contest and represent our country in such an event?

I was already planning about the song which I wanted for next year. I was talking with the composer about this fact so yeah it was on the cards because my plan was to start entering Eurosong every year and get familiar with people but obviously they did not give me the chance to do that and sent me right away 🙂 I did not think about winning, I did believe in my song but I did not imagine that I would win on my first experience in the festival. I an obviously thrilled that I won but it wasn’t my aim to win, it was just my starting point, my first step and I just flew 🙂

Many consider the Malta Eurosong as the only musical showcase we have in our Islands. Others say that we should abolish it as it is unnecessary yet we still keep on trying. What is your stance on this issue?

No, I mean it is the biggest thing which we have in Malta. I mean in order to become a popular singer in our Islands, you have to literally win Eurosong and it is very good as It opens the path to your career and I do not think that we should stop it because it is an event that everyone enjoys even though there are people who say that it is a waste of time and money. It is something to look forward to every year; I mean if you remove the Eurovision, what is there to look forward to, the election? 🙂

….and it’s the only thing that unites the country as well

Exactly and it is not something, I mean there is competition but it is fun at the same time, more people are getting exposure and it is a fun experience to take part in really.

….it would be really a pity to stop it

Again I have to agree, what’s the point, what’s there to look forward to if this event is removed from our cultural calendar?

Do you consider yourself a fan of the Eurovision Song Contest and if so which entries would you consider as the best ever submitted both locally and on the international scene?

Well actually, I am a huge fan of the Eurovision 🙂 there are lots of songs and entries that are like wow. I think from Malta, my favourites would have to be Little Child by Mary Spiteri and Keep Me In Mind by Mike Spiteri. Those are my two favourite locally and hmmm internationally, both of Johnny Logan’s winning songs in 1980 and 1987, Celine Dion with Ne Partez Pas Sans Moi, liked also J’Aime La Vie by Sandra Kim in 1986, and also Linda Martin with Why Me and recent ones, I would have to pick Fly On the Wings of Love by the Olsen Brothers. I think that was the last one that really struck a chord with me.

In the meantime, have you heard any of this years’ other competitors and do you have any favourites from the crop of entries?

Yes, I have managed to listen to them all especially the ones that are competing within our semi-final stage. My favourites at this point have to be Denmark and Norway.

This years’ edition of the Eurovision Song Contest is made up of a huge number of ballads thought many have described your entry as a typical Eurovision ballad with a classical feel to it. Do you believe that you can take this contest for the very first time to Malta next year?

So, let’s start off by highlighting the fact that this is not MTV but the Eurovision Song Contest and therefore these very modern sounds are ruining the event in my opinion. Before the Eurovision was something extravagant and prestigious. Nowadays, you see people with almost no clothes on, with a bunch of noise. I mean at the end of the day, Eurovision should remain as it is and one should keep to its traditional focus and not remove its original creative ideas.

It used to be more formal and more important…

Exactly, exactly now it has become too commercial and too much MTV style. There are not a lot of boring ballads this year, there were years in which boring ballads reigned supreme. I do not think there are a lot of ballad songs although there are many who have a slow-tempo. I mean My Dream is not a sleepy ballad which would signify a coffee break as it has a bit of a twist. I am not saying that because it is my song but because it’s the truth.

During this years’ edition of the Malta Eurosong competition, you managed to overcome bigger artists to win the tele-voting section of the event. What did this mean to you especially being a newcomer to the scene?

Looking at this years’ contest with viewers’ perspective, I believe that the public voted for the song instead of the face and I believe that, that fact was the biggest surprise of all that people did not even know me and they voted for the way I was being portrayed on the screen during those three minutes as they had barely seen me beforehand. I am very happy with the result because even if I am a viewer, seeing someone who is still quite new win the event is something out of the world.

The Eurovision Song Contest has seen a lot of changes throughout the years but the most extensive one came in 1998 when the orchestra and live music was removed from the show whilst the Jury voting was eliminated completely for tele-voting. This year will mark the introduction of the Juries within the semi-finals. Do you believe that a 50% Jury and 50% Tele-voting is the right way on how to go about this?

Yes, because hopefully the Jury if it is professional then it will overlook political agenda or the countries’ demography or economy or what not. I do agree with the Jury because small countries like us would always suffer from tactical voting as seen in past years.

What is your stance about the removal of the Live Orchestra?

After the Eurovision Song Contest, whatever the result maybe, what are your plans?

Hopefully if they do take me down, well let me say that I am living day by day right now seeing what my future holds. I do know what I want to do after the Eurovision Song Contest but I do not have anything set in concrete yet I would like to go to London and give the West End a shot but if that does not work out I have a job with the kids and also as a make-up artist so no problems. There are so many small things that I would like to do but you know the result is really an important factor in the long run so we will see.

Do you plan to keep participating in other local festivals and if this opportunity arises would you like to represent Malta for a second time at the Eurovision Song Contest?

Nope…Nope…I never was a fan of these festivals. Eurosong was the first festival that I competed in and they are just not my thing. There are too many complications. I do not think I will try again, I am not sure I would say no but at this point it would be quite a resounding no.

Maybe if the right opportunity or song comes along?

No, I mean once you win, you lose that sparkle, I mean why close the door to other opportunities to go back to something which you have already did on another occasion.

One of the styles that really suit you is the musical genre. Do you plan to travel abroad to try and widen your horizons?

I wish I could if I had the money to do so and I would do my utmost but financial restriction is always the worst possible thing.

How are you approaching the Eurovision Song Contest Experience?

It’s a dream come true actually. There aren’t any words to describe the feeling that I have inside of me. I was actually re-watching the festival yesterday evening because I still cannot believe that I managed to overcome the odds and win the event. This is something that I have always been dying to do that I still gasp as people recall the fact that I am representing Malta and will be noted in the history books and one of the representatives.

Taking the worst case scenario that means, not making it through to the final round of the competition, would you still go and see the event live?

Of course, why not, I mean at the end of the day I am not a spoilsport and this would be one of those moments in life which can be termed as a once in a lifetime opportunity.

Would you like to say anything to your fans at www.ESCflashmalta.com?

I would like to thank everyone for their support through their nice comments before I won as well as after I won whilst also thanking those people who voted for me both during the Eurosong competition. I would also like to encourage you to promote our song with any relatives and friends abroad so that if they like our song then they should vote for it 🙂 Thanks a lot for all the word you do.